The Kerala Govt has encroached upon Karnataka Government’s land in Kodagu and have started work on Barapole Hydel Project inside Brahmagiri Sanctuary. 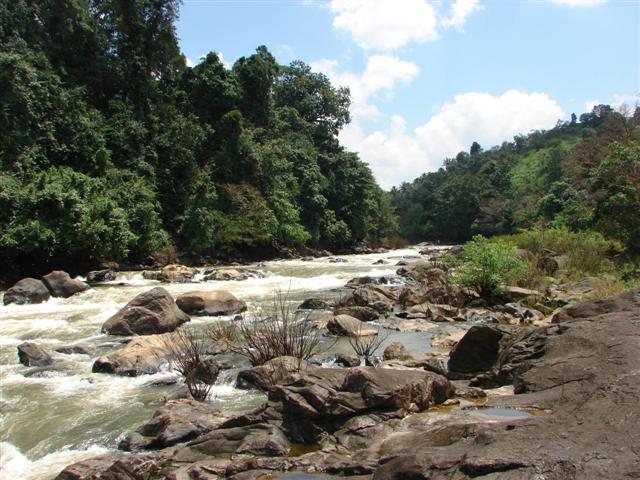 View of Barapole at Makutta

The Government of Kerala has allegedly encroached upon an area belonging to Karnataka  in the border area of Kodagu, inside the Bramhagiri sanctuary, to construct a Mini Hydel Project.

The land in question is the area around the Barapole river in South Kodagu. The boundary markers have been moved twenty meters and construction activity has begun.

In 1908 the Forest Department had issued a Gazette notification in “The Coorg Gazetteer” demarcating the below(in pic) land as Reserve forest land, with the Barapole river as the boundary marker, with Coorg state on one side and Malabar State on the other. The Bramhagiri sanctuary  was notified in 1974 and the attempt of the Kerala Government to alter the course of the Barapole is in contravention of forest conservation laws that clearly state that land and water bodies will not be disturbed inside sanctuaries. The  Karnataka Forest department, though aware of the developments have decided to keep mum for reasons best known to them. View of the Forebay site which the Kerala Govt is encroached upon according to local officials.

The Barapole project is joint venture between the Barapole Power Generation Company ( BPGC)  and the Kerala State Electricity Board( KSEB). The construction works was inaugurated on September 27th  2010 at Ayumgodu Village in Taliparambu Taluk .The  project has been sanctioned Rs 550 lacs  by the Government of Kerala,  and it aims to generate  21 Mega watts of power.

That Kerala Govt has claimed that  ” the scheme is within the territory of Kerala and agrees that “the catchment area is entirely in Karnataka”. Claiming further that..”No forestland is involved”.

This is not the first time the government of Kerala’s has mischievously attempted to generate power by dubious means while taking advantage of the resources in Kodagu District that borders Kerala.

The Barapole that originates in the Brahmagiri hills of Kodagu has overcome
many attempts to dam it as well as attempts to generate power by the Government
of Karnataka, but due to stiff oppositions from environmentalists and locals, the
Government shelved its plans. The government of Kerala’s mischievous attempts to
generate power by devious methods should be stopped immediately.

The Barapole that originates in the Brahmagiri hills of Kodagu has  overcome many attempts to dam it as well as attempts to generate power by the Government of Karnataka. Due to stiff oppositions from  locals and environmentalists, the Karnataka Government shelved its plans.

In the past Kerala Govt has even tried to ignore supreme court orders.

Save the biosphere of Kodagu at any cost and leave the Barapole river to nourish its multitude of biodiversity. Stop prospecting that nature.
Sören Kabell, forest officer, Sweden