Bearing the brunt of Rainfall 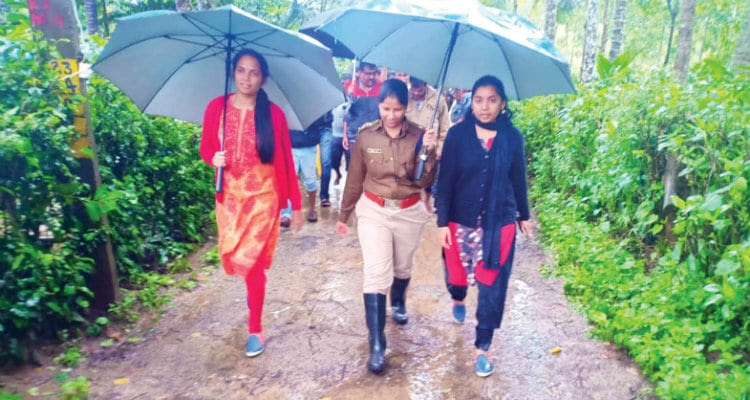 Image: WOMEN POWER: When a disaster strikes, it always calls for a joint effort by the District Administration to bring solace for the people affected by floods. This picture shows three women officers (from left) Kodagu DC Annies Kanmani Joy, SP Dr.Suman D. Pennekar and ZP CEO Lakshmipriya walking the talk at Karadigodu in Siddapura yesterday. In the absence of Ministers and elected representatives, the officers are on field since the last five days assessing the damage and bringing relief to people. They are ensuring that relief reaches Ground Zero without any delay.

If you are planning for a weekend trip to Coorg now, you may have to exercise caution as Red Alert has been declared in the hilly district following heavy rains and landslides. The plans of Mysureans and Bengalureans to visit Coorg this long weekend starting today (Varamahalakshmi, Second Saturday, Sunday and Bakrid holiday on Monday) have been hit. Similarly, next week, Thursday is Independence Day, and opens the possibility of another long weekend.

River Cauvery is in full flow at Bethri village near Murnad. Normally in June-July, the river overflows inundating surrounding areas. This year, in August, after a delay of more than a month, there is a massive flow in the river and water has submerged areas that are well beyond the river limits. Hundreds of affected people have been shifted to relief centres.

While tourists say rain has sent their travel plans for a toss, the ground situation in Kodagu is really bad as rain is showing no sign of relenting. It has been five days since it is raining heavily in South Kodagu, forcing the District Administration to ship boats to rescue families stranded amidst water and coffee estates. Virajpet Taluk is the worst affected with several crucial roads cutting off.

The Birunani-Badagarakeri Road’s present state where not even a person can walk safely and it will take months for the regular traffic to be restored. The District Administration and the elected representatives have the responsibility of restoring many such roads in Kodagu that have been damaged.

Traffic between Virajpet, Gonikoppal, Ponnampet, Balele, Kutta, Madikeri, Murnad, Napoklu, Birunani, Srimangala, Badagarakeri and Nalkeri has been blocked as roads are submerged under 6 feet deep water. Along with Kodagu, even Mysuru district is bearing the brunt of monsoon mayhem as several roads are blocked with more than 1,25,000 cusecs of water being released from Kabini and Taraka Reservoirs.

Nanjangud Road (Bengaluru-Nilgiri Road) leading to Ooty has been blocked and traffic has been stranded. Next post Heavy Rainfall throws Coorg out of gear